Top things to do and see in Athens Greece

Athens is the capital of Greece and the city of history and ancient civilization but at the same time a city buzzing with life, that never sleeps. Here below you can find an indicative list with the things that you can do and see in Athens during your visit.

The cornerstone of European civilization, the Acropolis is the most important ancient site in the Western world. Crowned by the Parthenon, it stands over Athens, visible from almost everywhere within the city. Its monuments and sanctuaries of white Pentelic marble gleam in the midday sun and gradually take on a honey hue as the sun sinks, while at night they stand brilliantly illuminated above the city. You can walk through the marvelous creations of the Golden Age, such as: the Parthenon, the Propylaia, the Temple of Athena Nike, the Erechtheum with its famous Caryatids. More than any other monument, the Parthenon epitomises the glory of Ancient Greece. Meaning ‘virgin’s apartment’, it’s dedicated to Athena Parthenos, the goddess embodying the power and prestige of the city. For a fuller picture of the glory of Greece, you’ll also need to visit the other important Athenian monuments: the theatres of Dionysos and Herodes Atticus, the Areopagus, the Pnyx, the Kerameikos ancient cemetery, the Ancient Agora and the Roman Forum.

The Acropolis Museum has a total area of 25,000 square meters, with exhibition space of over 14,000 square meters, ten times more than that of the old museum on the Hill of the Acropolis. The Museum is considered one of the most important museums in Greece. It houses more than 3.000 artifacts from the Archaic period to the Roman one, but the emphasis is on the Acropolis of the 5th century BC, considered the apotheosis of Greece’s artistic achievement. The museum reveals layers of history: ruins are visible in its floor, and, through floor-to-ceiling windows, the Acropolis is always visible above. After your visit, you can grab a lunch or coffee at the museum’s restaurant with breathtaking views of the Acropolis.

This temple is also known as the Olympieion or Columns of the Olympian Zeus, is a former colossal temple in the center of Athens. It was dedicated to “Olympian” Zeus. The temple is impressive for the sheer size of its 104 Corinthian columns (17m high with a base diameter of 1.7m), of which 15 remain – the fallen column was blown down in a gale in 1852.

This is the largest museum in Greece with more than 20.000 exhibits covering a vast period of history from the beginnings of Prehistory to Late Antiquity. It houses some of the most important artifacts from a variety of archaeological locations around Greece from prehistory to late antiquity. The exhibits, which cover a period from the Neolithic era to Classical periods, including the Ptolemaic era in Egypt – include sculptures, pottery, jeweler, frescoes and artefacts found throughout Greece.

It is considered as one of the greatest museums in the world and contains the richest collection of artifacts from Greek antiquity worldwide. It is located in the center of Athens and its entrance is on the Patission Street adjacent to the historical building of the Athens Polytechnic university. It is noted, that the museum has a neo-classical design. The initial plan was conceived by the architect Ludwig Lange and it was later modified by Panagis Kalkos who was the main architect, Armodios Vlachos and Ernst Ziller. At the front of the museum there is a large neo-classic design garden which is decorated with sculptures. 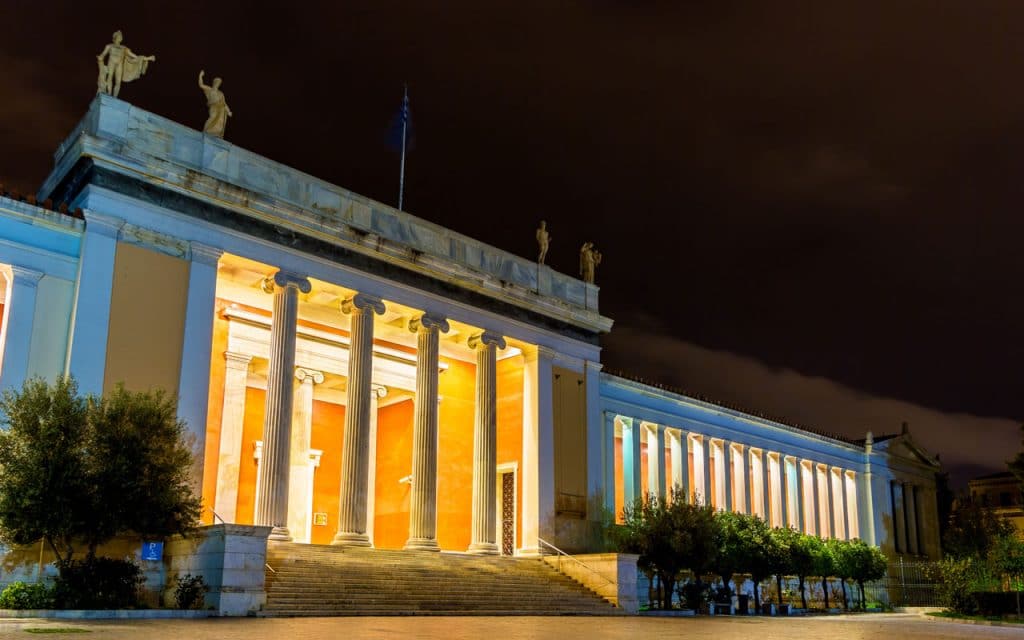 The Museum of Cycladic Art is housed in two separate buildings, which are connected by a glass-roofed corridor: The Main Building, housing the permanent collections and the New Wing, and the Stathatos Mansion, housing the temporary exhibitions. Since 1991 it houses temporary exhibitions and the offices of the museum. The building is accessible both from the corner of Vasilissis Sophias Avenue and Irodotou Street, and from the Main Building, via a closed passageway leading from the atrium. The Museum of Cycladic Art is dedicated to the iconic minimalist marble Cycladic figurines, dating from 3000 BC to 2000 BC. They inspired many 20th-century artists, such as Picasso and Modigliani, with their simplicity and purity of form. The rest of the museum features Greek and Cypriot art dating from 2000 BC to the 4th century AD.

The Byzantine and Christian Museum, which is located in Kolonaki, houses religious artefacts of the Early Christian, Byzantine, Medieval, post-Byzantine and later periods. The museum has over 25,000 artefacts in its possession. The artefacts date from between the 3rd and 20th century AD, and their provenance encompasses the entire Greek world, as well as regions in which Hellenism flourished. The size and range of the collections and value of the exhibits makes the Museum a veritable treasury of Byzantine and post-Byzantine art and culture.

Athens National Garden is accessible from seven entrances. The central entrance on Amalias Avenue, one on Vasilissis Sophias Avenue, three on Irodou Attikou Street and two more in the area of Zappeion park. The Garden before it was renamed to “National” it was called Royal as it was commissioned by Queen Amalia in 1838 and was used, in order to accommodate a wide variety of plants and animals.

One of the most amazing finds in the garden during 19th century excavations is the Roman floor, uncovered at a depth of one meter, belonging to the courtyard of a Roman villa very near what is now the entrance on Vasilissis Sophias Avenue. The Garden also has a conservatory, children’s library and a small café. The entrance to the traditional café in the Garden is on Irodou Attikou Street. The diverse vegetation, the fountains, the hidden pavilions and the scattered antiquities make the National Garden the perfect place for a stroll especially in summer during the hottest hours of the day. 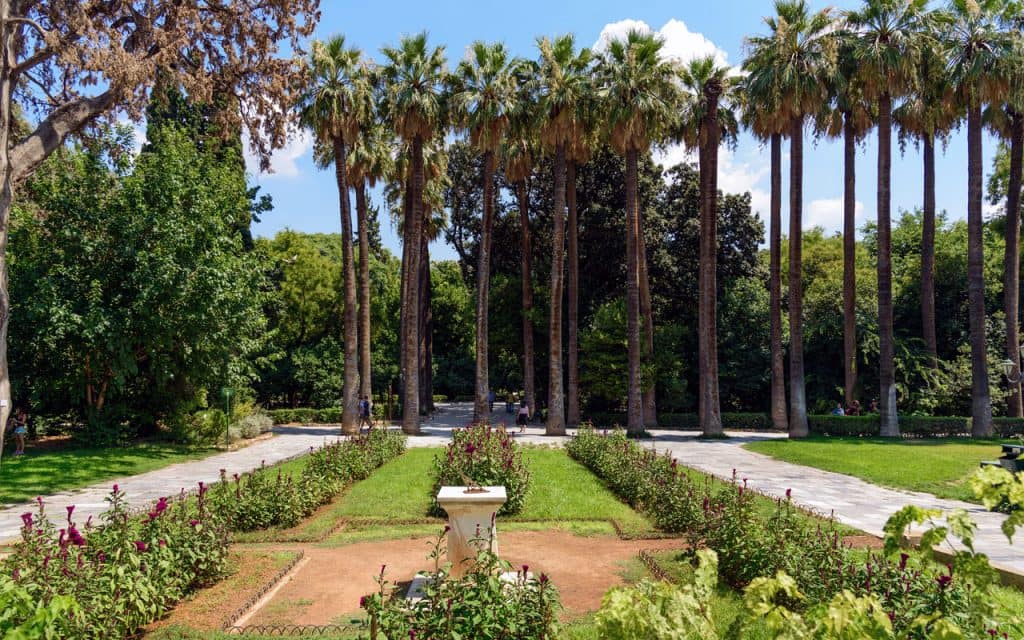 From Syntagma Square, stroll down the famous shopping street of Ermou, until you reach Monastiraki, and there you’ll enter the old markets teeming with tourist and antique shops. Avissinias Square with its flea market is particularly picturesque. Another way to go is towards Stadiou and Panepistimiou avenues, with their iconic buildings, historic cafes, and all manner of restaurants and stores.

Spreading its winged roof on a hill above Faliron Bay, this building, surrounded by a vast park, made a big splash on the Athens cultural scene when it opened in 2017. With a location, halfway between downtown Athens and the port of Pireaus, it has great views of the sea and the city as well as huge park and a sailing pond (summer only).

A large central lawn hosts free dance and exercise classes, as well as midnight movie marathons in summer, while rambling paths cut through patches of lavender and rows of olive trees. A playground, interactive sound installations and rental bikes (€1 per hour) add to the fun. The National Opera is located here as well as a library, they have also a cafe and a coffee kiosk.

Apart from regular public transport, you can use a free shuttle bus, departing from Syntagma at Ermou. It runs several times a day on weekdays, and every 30 minutes 9.30am to 11pm on weekends.

Thank you for subscribing.

we respect your privacy and take protecting it seriously